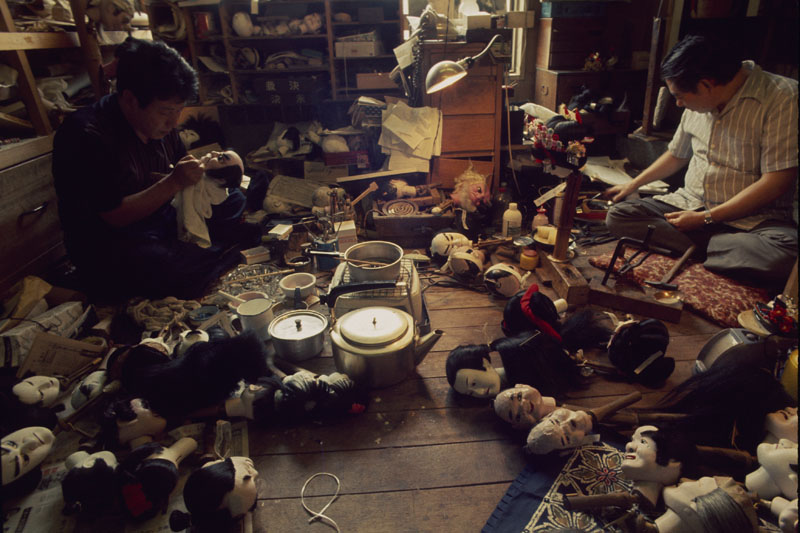 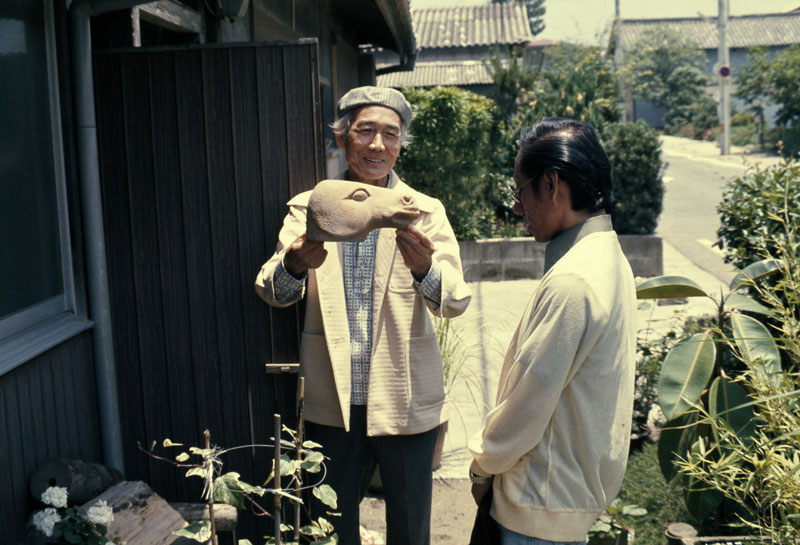 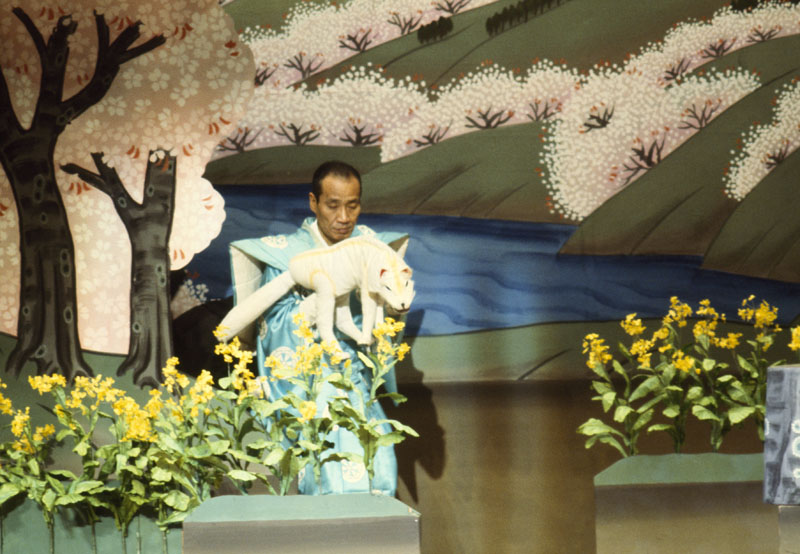 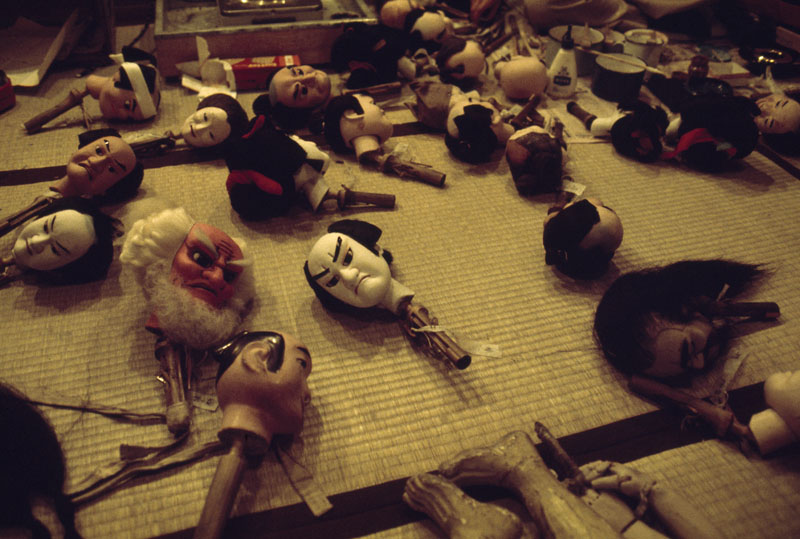 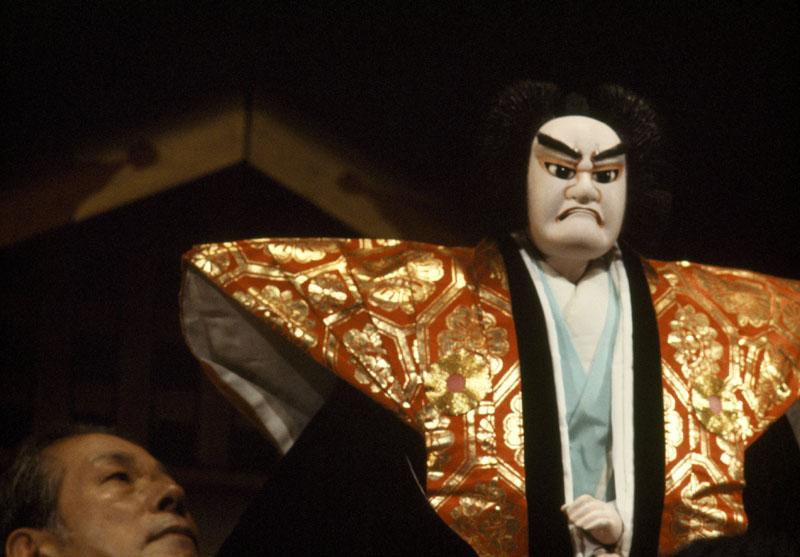 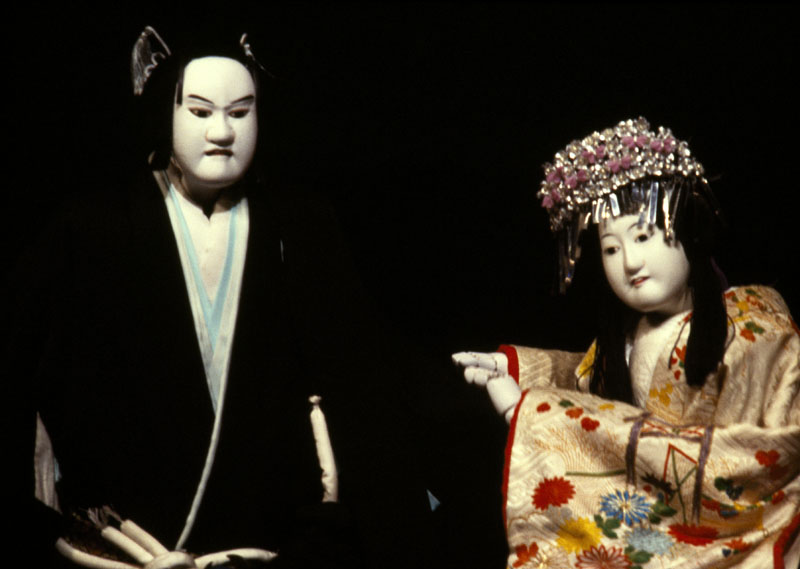 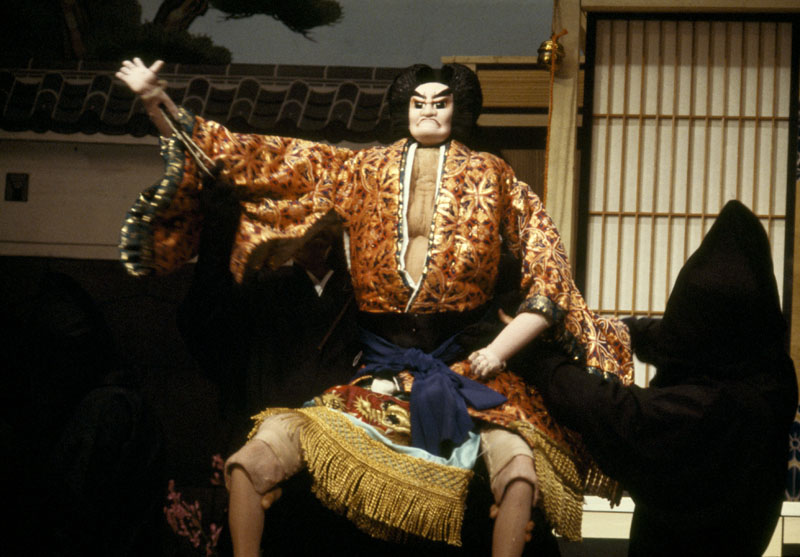 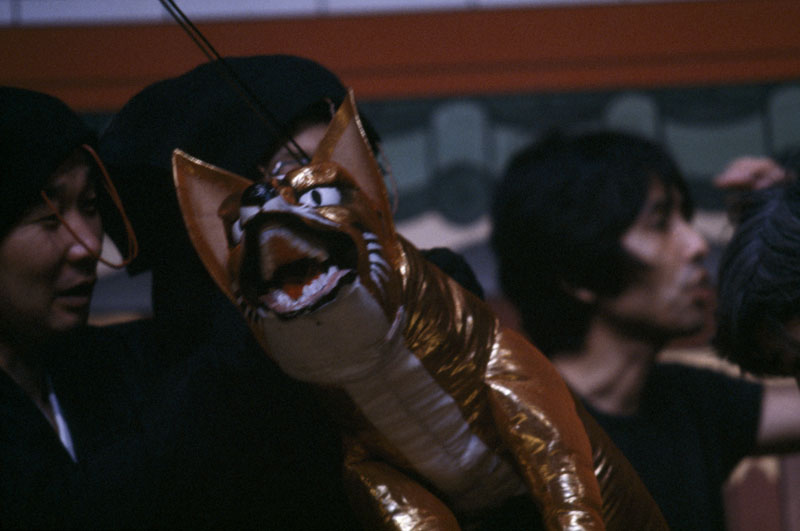 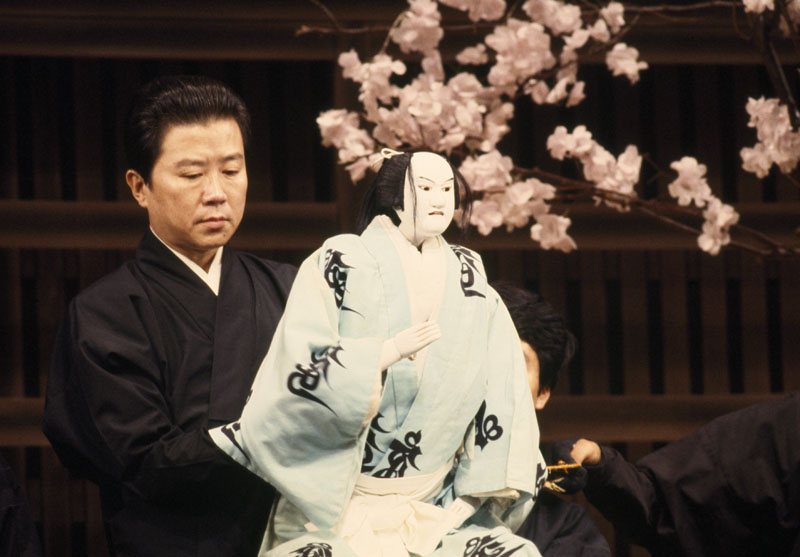 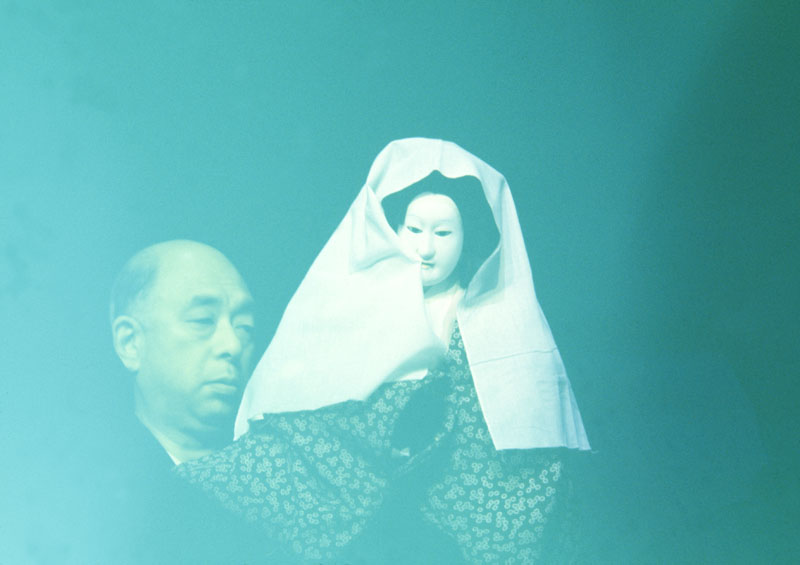 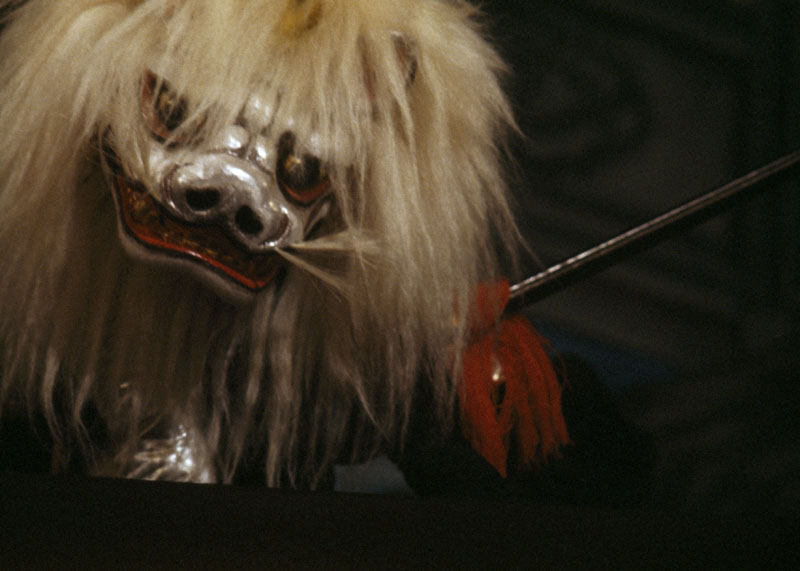 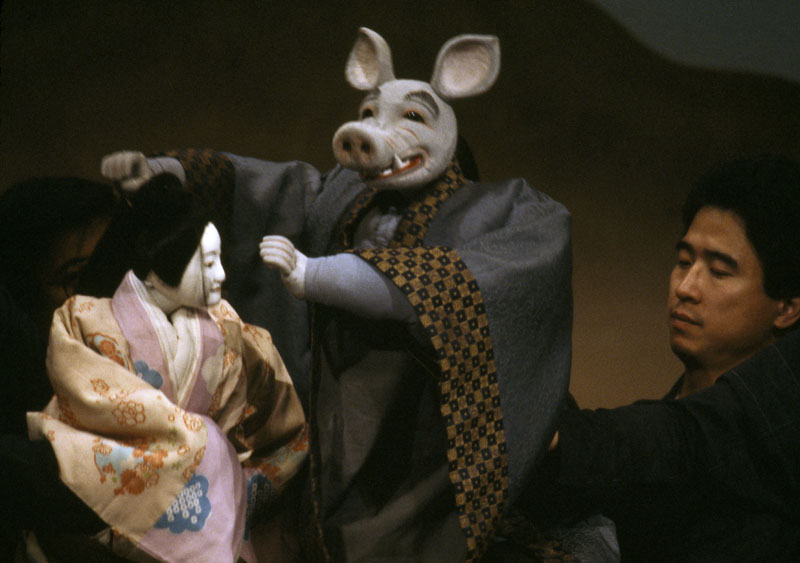 Bunraku, one of the world’s most highly developed forms of puppet theater, is an unusually complex dramatic form, a collaborative effort between puppeteers, narrators, and musicians. First developed in the seventeenth century, Bunraku was officially recognized as a “masterpiece of the oral and intangible heritage of humanity” by the United Nations Educational, Scientific, and Cultural Organization (UNESCO) in November 2003.

Barbara Curtis Adachi (1924-2004), who lived most of her life in Tokyo, witnessed her first Bunraku performance in 1935, at the age of eleven. Her extensive involvement with the troupe began in the 1960s and continued throughout the rest of her life. She attended over four decades of Bunraku and kabuki performances, conducted over one hundred interviews of performers and craftsmen, and took thousands of photographs of both traditional Japanese theater and crafts. Adachi toured with the National Bunraku Troupe both in Japan and in the United States, appearing with them for demonstrations, lectures, and television performances. Adachi, a former columnist for two Tokyo newspapers, lectured widely on Japanese crafts and theater, and wrote several books including The Voices and Hands of Bunraku (1978) and Backstage at Bunraku (1985).

The Barbara Curtis Adachi Bunraku Collection at Columbia’s Starr East Asian Library represents four decades of close contact and respectful collaboration between Adachi and the Japanese National Bunraku Troupe, the leading performance group of Bunraku in the world. Adachi’s numerous superb photographs of rehearsals and performances reflect the depth of her understanding and knowledge, as do the other diverse artifacts she selected over the years for inclusion in her collection. The comprehensive combination of visual, audio, and textual materials provide researchers with the foundation for studying all aspects of the Japanese puppet theater in modern times, and for studying these aspects in relation to each other.

The online Bunraku gallery is divided into plays, productions, authors, kashira (puppets), characters, performers, and image tags, and even includes data on individual performances and scenes. It documents the form’s revival in the second half of the 20th century, through more than 12,500 digitized slides and nearly 7,000 black-and-white photographs of rehearsals and performances.

Below is an interactive, hierarchical graph of the structure of just one play: Oshun and Dembei (Chikagoro kawara no tatehiki / 近頃河原の達引), including links to its authors and productions in which it was performed, which in turn link to scenes which link to performer information.

You can click on the circles to open or collapse nodes or double-click on one with a bolded name to learn more about its corresponding author, performance, scene, performer, character, or kashira (puppet).

The full collection contains slides, photographs with corresponding contact sheets and negatives, audio and video materials, performance-related printed materials, realia objects and personal papers. Visual, audio, video and printed materials, and realia objects are described at the item level with play titles, production dates, and performer names and other descriptors, if applicable. Personal papers are described at the folder level. 178 plays, 290 productions, and 183 performers of the National Bunraku Troupe are cited in the collection. Visual and printed materials for fifteen Living National Treasures of Japan in Bunraku are also included. For more information, look to the Columbia University Library Archival Collections page, and the Bunraku Collection Online Finding Aid.