Chikamatsu and the Early World of Bunraku

Adapted, with permission, from Donald Keene, World Within Walls.1

During the premodern Edo period (1603-1868), the two most important forms of drama were Kabuki, a theater of actors, and Bunraku, a theater of puppets. Both began to evolve as popular entertainments toward the end of the sixteenth century and quickly secured a place in the hearts of the common people.

Almost all Kabuki plays in the 1680s dealt with the troubles within a great daimyo, or lord’s, household, the genre being known as oiemono. In Bunraku, more attention was paid to commonplace lives. The first play about a lovers’ suicide was performed in Osaka in 1683. This kind of play, dealing with ordinary, contemporary life and not with the heroes of the past, came to be known as sewamono, a term that probably means something like “gossip play,” now generally accepted to mean “domestic play.” The term was used in contrast with jidaimono, or “period piece,” dealing with historical events.

By the 1680s both Kabuki and Bunraku had developed into theaters with considerable verve and some polish, but the texts performed were undistinguished. Each theater exploited its special capabilities: Kabuki, performed by actors, provided maximum opportunities for the display of virtuoso acting techniques; Bunraku, taking advantage of the expendability of puppets, sometimes included scenes of mayhem or superhuman feats of strength. In neither theater was it attempted to create dramatic works of permanent value. The managers were satisfied as long as the theaters were filled, and the audiences apparently craved nothing more than to watch their favorite actors or chanters perform new roles.

This situation was changed completely by one man, Chikamatsu Monzaemon (1653-1725). Chikamatsu excelled as an author of both Kabuki and Bunraku plays, but today he is known for his Bunraku, the finest works of that theater. The instant success of his play Yotsugi Soga (The Soga Heir), written in 1683, established his fame. This play includes the michiyuki, or journey, of the Soga brothers’ lovers Tora Gozen and Shôshô, which is written in highly poetic language. In Chikamatsu’s 1703 play Sonezeki Shinjû (The Love Suicides at Sonezaki), which marked the establishment of the sewamono as a genre, the michiyuki attained the dramatic height of finding, within the pathetic circumstances of the suicides of a clerk and a prostitute, the material of tragedy. 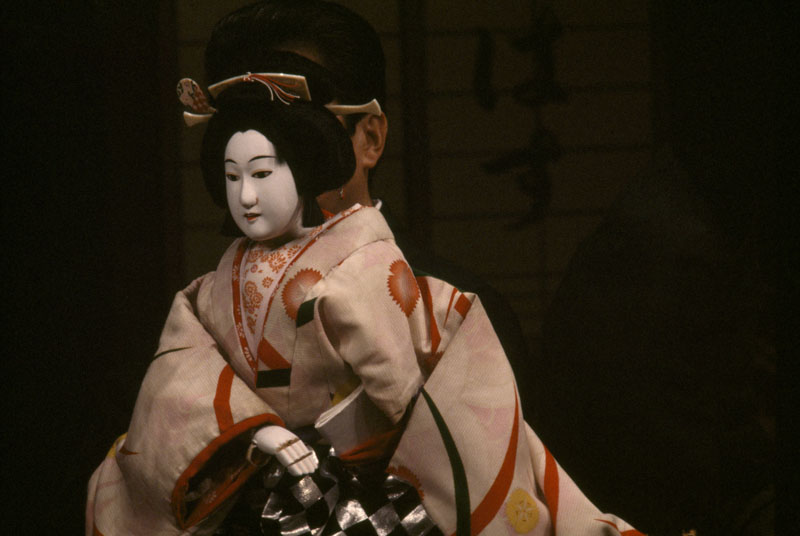 Musume in the February 1981 production of The Love Suicides at Sonezaki, by Chikamatsu Monzaemon.

The interest in his plays lies first of all in his portrayals of the lives of townsmen. The little men who appear as the heroes of Chikamatsu’s sewamono, like the heroes of many modern plays, are trapped by financial and other circumstances which they are powerless to alter, and in the end their daggers are turned against themselves, and not against an enemy.

The years after the death of Chikamatsu in 1725 and the early retirement of his major rival as a playwright, Ki no Kaion (1663-1742), paradoxically marked the period of the greatest prosperity for the puppet theaters. The thriving state of Bunraku after Chikamatsu’s death was not due so much to the abilities of the dramatists as to developments in the operation of the puppets and the art of recitation. Toward the end of his career, Chikamatsu sometimes catered to the taste of his audiences for trick stage business, known as karakuri, but in the Bunraku of his successors, no effort was spared to exploit the capabilities of the puppets, especially after 1724, when the three-man puppet came into general use. In the decade after Chikamatsu’s death in 1725 various other improvements were made: in 1727 puppets with mouths that moved, hands that could grasp objects, and eyes that opened and shut were introduced; in 1730, the puppets’ eyes were enabled to roll; in 1733 the puppets’ fingers were jointed to permit movement; and in 1736 the ultimate refinement, the puppets’ eyebrows could also be moved. 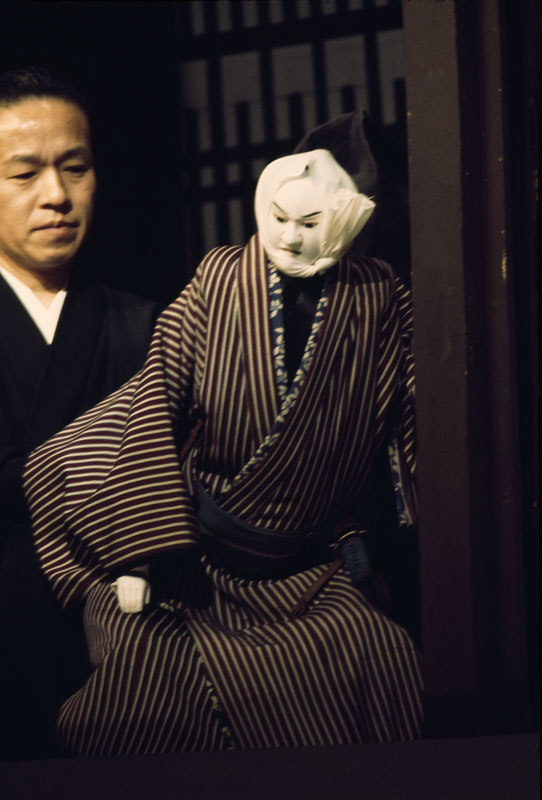 Genta in the May 1975 production of A Tragic Love Triangle, by Ki no Kaion.

The effect aimed at by both puppet operators and chanters was realism, but it was achieved only within the framework of essentially unreal conditions of performance. Chikamatsu’s sewamono represented the furthest development in the direction of realism that the texts of the puppet theater attained; the language is fairly close to contemporary speech and the problems faced by the characters are believable in terms of ordinary life. Even in the case of Chikamatsu’s plays, however, the visible presence of operators and changers and the awkward if artistic movements of the puppets established conventions of unreality that the audience cheerfully accepted. If realism had been the only goal of the performances, it would have been simple to keep the operators and chanters concealed, as at a European marionette show, but in fact each advance in terms of increasing realism tended to be balanced by the introduction of an additional element of unreality or even fantasy, especially of the variety called karakuri.

Kabuki overcame Bunraku in popularity after many decades of flirting with its themes and techniques. The period of Bunraku’s glory ended when Osaka was displaced as the cultural capital, but it had by then supplied Kabuki with about half the plays of its repertory and Japanese literature with many of its masterpieces of drama